Although I slept extremely well with the Ibuprofen, the morning did not bring good news.  I found that I was unable to put any significant weight on my right foot.  Knowing that the route to Najera would be 18 miles, much of it over lots of hardscape, Greg convinced me to take a bus to Najera.  At the desk in the lobby, I said goodbye to Greg, who was going to walk by himself.  The desk clerk called me a cab which I took to the bus station that was approximately 3K from the hotel.  After purchasing a ticket at the Logrono bus station and sorting out the confusing departure gates, I finally found the right boarding area and got the correct bus.

The ride to Najera was only 20 minutes!  The driver let me out in the northeast corner of town, and I found that I had to walk down through the main section of the town and cross the river at the west end to find the Hotel Duques.  “Walking” was not an apt term for my gait — more like “limping”, I would say.  It was an absolutely beautiful day, with very mild temps and clear skies.  It probably took me the same time to limp this distance to the hotel as it did to ride the bus all the way from Logrono!  Hotel Duques turned out to be a delightful place, just 100 meters from the lovely river walk cafes.

After checking in, I informed the desk clerk that my friend would be arriving later in the afternoon, and she agreed to greet him and show him to the room.  The river walk was right below where the Camino crosses the river and I decided that this would be an ideal place to sit and wait for Greg.  Choosing a ham sandwich (bocadilla con jamon) and a beer from one of the café menus, I sat out in the sunshine and caught up on journal entries while eating. After approximately one hour the sun went in and the wind picked up so I decided to go back to the hotel room.  This allowed me the opportunity to contact home via Facebook and post some pictures. 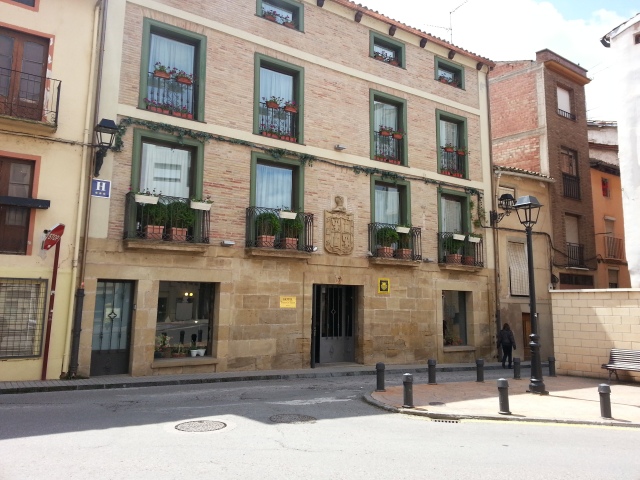 Before long, Greg arrived with his stories of the day.  It appeared that there was a long 2-3 mile walk out of Logrono on busy roads that would have been misery with my foot in the shape it was currently.  Along the way, Greg had been following another pilgrim who, as it turned out, had taken a wrong turn.  Soon they both realized the mistake and had to back- track.  Whoops!  Greg admitted that he was sort of daydreaming and not thinking about where he was going.  Fatal mistake on the Camino!  Greg asked me for an update on my injury, and I reported that I was no worse, there appeared to be no swelling, and that I could probably walk in the morning, God willing.

The hotel desk clerk directed us to a restaurant nearby since they did not serve dinner at the hotel.  The restaurant was located in the old section of town on a remote back alley and appeared to be somewhat questionable, at least from the outside.  As we walked in, we noticed there were other pilgrims in the place who were enjoying their meal and having a good time.  At the next table we were surprised to see Claire from Walnut Creek who was eating with three other ladies!  Greg and I were amazed that she made it this far.  The last time we saw her she was struggling up the Pyrenees on that first day.  We were certain that she had dropped out.  It was a happy reunion, and we were both glad she was still in the game. The meal was quite good, and once again I had the garlic soup as my primero, with veal chops for secundo, then ice cream for dessert.