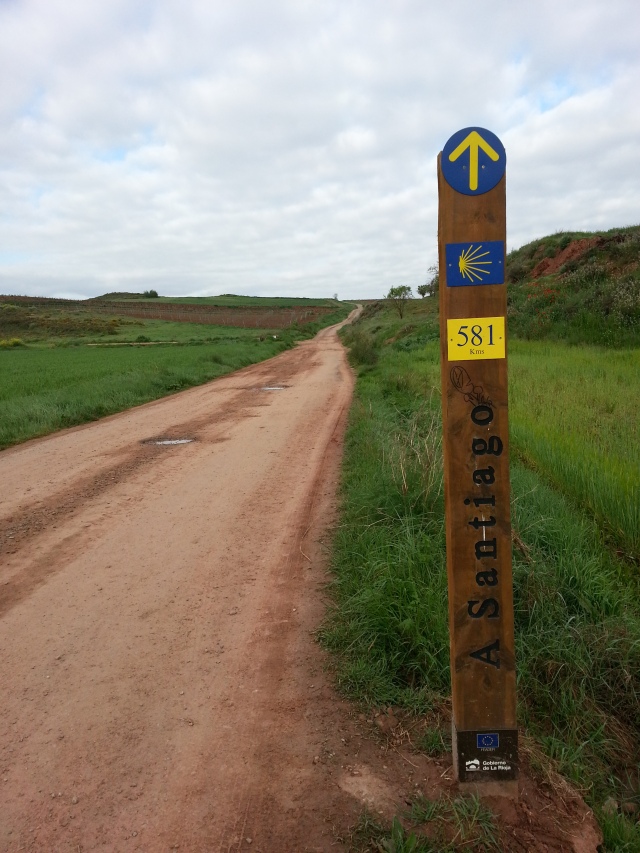 We were now deep into La Rioja, the premier wine-growing region in Spain, and we walked through many vineyards, lush wheat fields and more mustard than one could imagine.

*NOTE: I have been subsequently informed through a comment that this is actually not mustard, but “rapeseed”, which is apparently used to manufacture canola oil. Did not know that. Sure looks like the mustard we have in Northern California that grows profusely in our vineyards. 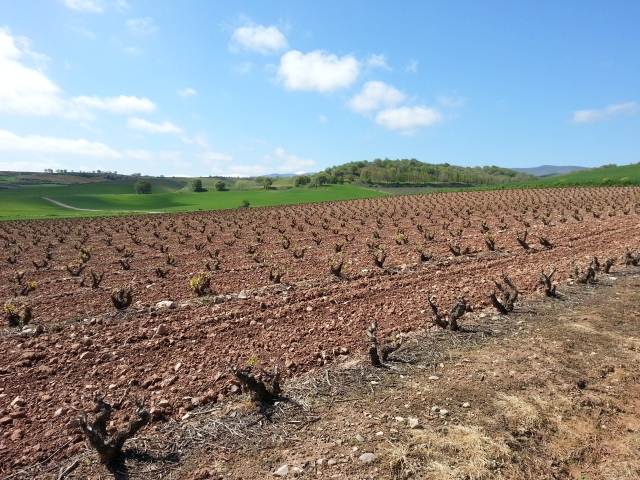 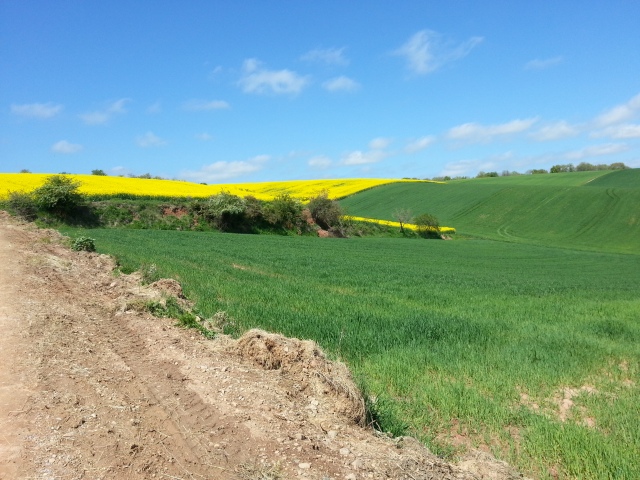 Our first stop was in Azofra.  We plopped down on some benches in the main square and ate some fruit and nuts from our buffet at Hotel Duques.  Along the way we had been joined from time to time by a fellow pilgrim and his dog.  This sheepdog kept looking back at us until we caught up to him and then he rejoined his master ahead of us.  He had his own backpack and seemed to be doing just fine with it.  In Azofra, his master went in and bought some food for him, so he was snacking right along with us.  There in the square I befriended 3 middle-aged German couples.  When I told them what had happened to me in Logrono, they seem sympathetic.  After a while, one of the men in the group came over and gave me some tape which he said would help me bandage my foot properly.  I thanked him, but told him that I had some tape of my own.  He acknowledged this, then smiled and the Germans moved on out of town.  Little did I know at the time, but this was the first of many kindnesses that would be extended in many ways from many peregrinos over the course of 6 weeks. 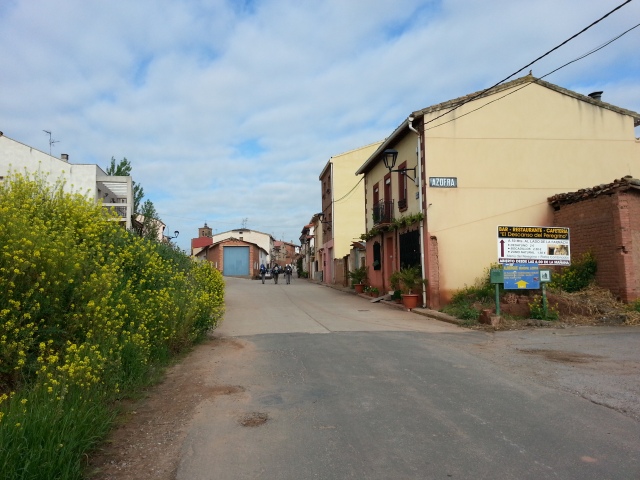 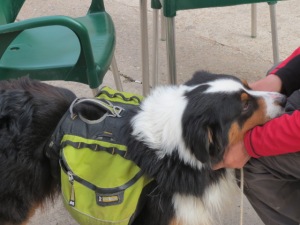 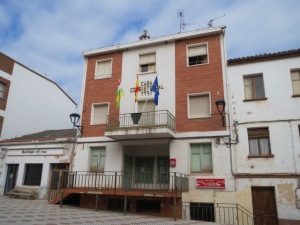 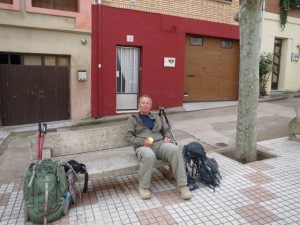 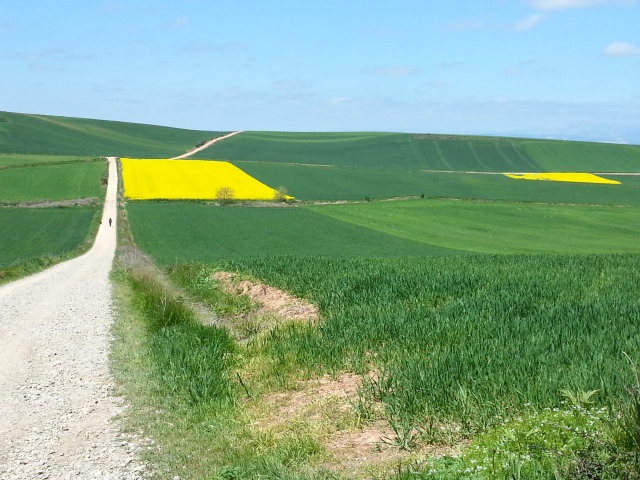 Within an hour or so, we reached the top of a hill and encountered a rare rest-stop/picnic area.  There we encountered the three German couples again, and I bantered back and forth with them.  They turned out to be very jolly and friendly, and they referred to me as Mr. California.  There was a funny sign at this rest stop that said “don’t shit” with a figure in a squat position.  Greg and I both got a significant chuckle out of this. 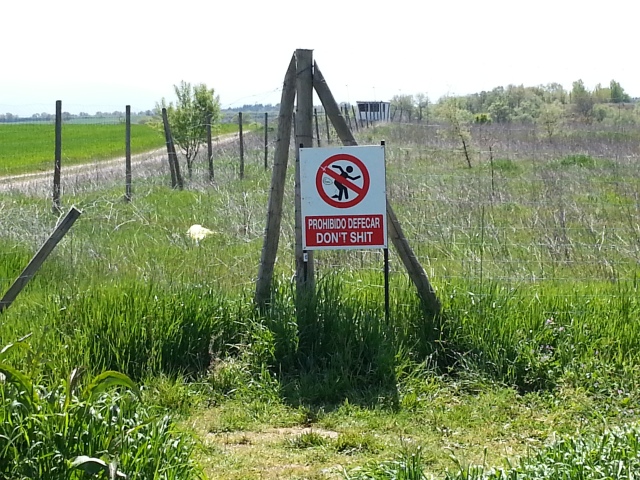 About half way to Santo Domingo, we entered the strange town of Ciruena.  At the east of town, there was a golf club called Rioja Alta and just after that we passed through what appeared to be a modern ghost town—and a builder’s nightmare.  Dozens of newly built and unoccupied townhouses and single family homes stretched out before us.  Greg and I theorized that they must have built this development on speculation and then the economy was so bad that no one moved there and bought houses.  Soon we were past this section and into the older part of the town that was also fairly deserted before reaching Santo Domingo de Calzada.  After entering the city limits, we discovered that we had a long way to walk to get to the center of town where our hotel was located.  We found it and discovered that there was a middle aged French couple waiting outside unable to get in.  They were also pilgrims and heading in the reverse direction.  Using our combined knowledge of minimal Spanish, we used their phone and called the number listed on the outside of the building.  Within five minutes, our pleasant host came and showed us to our rooms.  Later we found a mercado a few block away and bought food for the next day and then located the recommended Italian restaurant in the main part of town for a good meal.

2 Responses to Vineyards and Mustard*