The Blistering Path to Sahagun 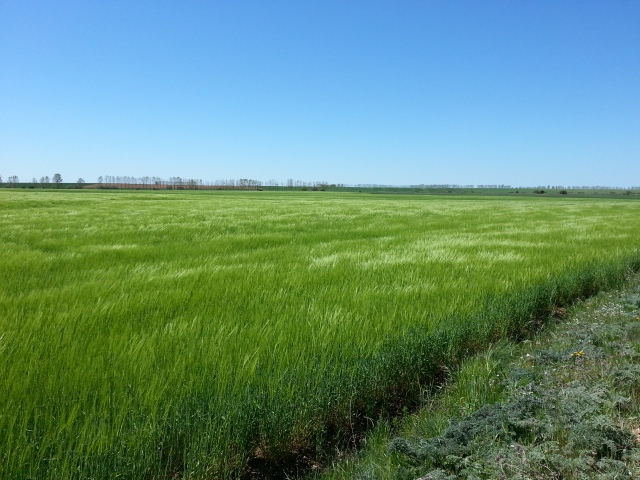 Another good breakfast, served to us in the busy bar area. Substantial cups of coffee and refills were a welcome surprise. The Irish couple ate with us and headed out early. Greg and I kept our fruit for later in the day and eventually got going at approximately 9:00 am. At the first cafe/bar we came to, there were several pilgrims from the alberque who were stopped for coffee and snacks. It was there we saw Richard from the night before accompanied by the Norwegian girl and her two dogs! We kept going on to Ledigos and Terradillos de los Templarios before stopping in Moratinos to eat our lunch. This time we were on the other side of the road, but it was the same long straight slog.

I had to stop and rest for a while, and Greg kept going. Once again, I lost sight of him within ten minutes. Just after crossing into the province of Leon, leaving Palencia behind, the trail took a twist near the busy highway andeventually headed to the right along the rio Valderaduey.  I was soon led by a path along the river to a shrine called Virgen del Puente that consisted of some old ruins:

Leaving the shrine behind, the path turned into an industrial approach to the city of Sahagun. At this point, I was limping considerably due to the painful blisters. Soon the entrance to the town was before me, and I crossed the city streets, map in hand, trying to find my hotel. I was so tired at this point that it was difficult to step up or down off a curb. Passing a cafe, I saw Greg sitting there where he was having a drink with a pilgrim we had met in Villacazar. I didn’t want to stop and indicated that I really needed to get to the hotel as fast as possible. I took some wrong turns, but found it soon. Greg was there when I arrived, having taken another route. We checked in at the Hotel El Ruedo and carried our bags up a long stairway. The WiFi only worked downstairs in the bar area, so today it was somewhat annoying. After showers, I discovered that Phyllis was also staying there and that Pia was also in town at another hotel. Phyllis said that she would round up Pia and see us later. Outside at the front of the hotel on the plaza, the two German guys were having their usual large beer and smoking cigars. They were happy to see me. I thought this might be a good time to go to the Farmacia and get some blister remedy. Two doors down form the hotel I found one! The pharmacist directed me to a section that had all kinds of bandages and tape. She also gave me some disinfectant salve that she said would be helpful to prevent infection to the “ampollas”. There were two American women in the store who were sympathetic to my situation. Later outside on the plaza, we conversed with them. One was a seasoned Pilgrim from Asheville, North Carolina who was part of a walking club. This was her third Camino. The other woman was suffering from an injury and had been to a doctor earlier. He told her she needed to get off her feet for a couple of days, so she was going to take a bus to Leon and stay in a hotel there and then try to carry on. After a ten-minute conversation, we parted and Greg and I walked down to the far end of the Plaza and found an ATM where we “cashed up”. Back near the hotel we ran into Phyllis who told us that Pia was not feeling well and was going to stay in her room. The three of us found an outfitting store, where Greg looked for a hat and Phyllis found some walking sticks that she thought would be great for Pia. Greg didn’t find a suitable hat, so we left and found a restaurant near the hotel where all three of us went inside had a great meal. After the meal, I had an email from Heather indicating that it was probably wise not to break the blisters because they might get infected. I was really torn as to what treatment I should use.