From the Countryside to the Capital of El Bierzo 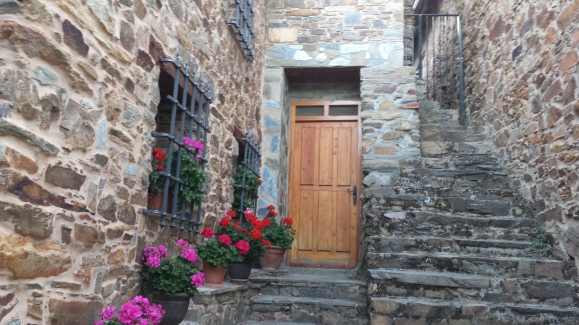 September 8, 2015:  Our hostess at Pension Riego de Ambros had a delightful breakfast prepared for us on this morning of our 31st wedding anniversary.  She did not charge us for the meal and wanted that to be her gift to us on this special day — just one of the many kindnesses we received throughout our long trek!  We finished eating and set out down the steep hills to Molinaseca. 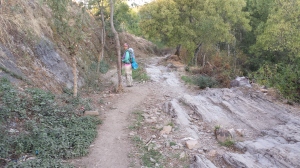 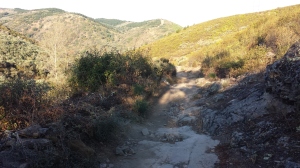 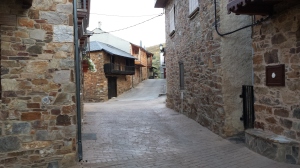 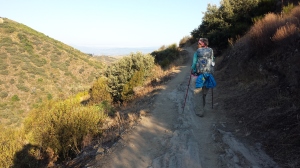 Just across the beautiful roman bridge into town, we found a great bar/cafe and had cafe con leche and some delicious pastries that were supplied by the owner.  Then we set out along the long uphill road towards Ponferrada.  Following the suggestion in the Brierley guidebook, we veered left towards Campo and took the gravel track down the hill and into the little village, eventually reaching Los Barrios at the outskirts of the city and climbed up to the Castillo de los Templarios.  As we approached the city we could hear fireworks and cannons going off at a regular clip.  It was soon apparent that we had arrived during a major fiesta.  The streets from the castle leading into the Old Town were filled with celebrants and craft booths making passage through the crowd difficult.  I could see the conflict growing on Heather’s face as I know she wanted to stop at the booths and see all the artifacts and clothing on display, but was also in pain from her right quad that was really hurting.  We made it to the Hotel Aroi Bierzo Plaza within a few minutes and checked in.  Our room had a window looking out over the main Plaza Ayunamiento that was now all set up with a huge stage, tents and chairs.

We took showers and stretched out to relax for the rest of the day.  While Heather was resting up, I ventured down to the restaurant and ordered Pimientos Padron and a cheese plate with bread and brought that to the room.  It was probably the best lunch meal we had during our entire trip.

Later, I went back downstairs and walked to the castle to get some more pictures of this amazingly well-preserved structure.  It was closed to entry for the day, but I enjoyed just looking at it.

The festival was heating up by now, and I managed to get a great video of the procession that closed the religious portion.  When I returned to the room, a sound check was underway in the plaza that indicated there was definitely going to be some sort of concert before too long, so I went down to the main desk at the lobby and asked if it would be possible for them to change our room to one that was toward the back of the hotel and not on the plaza.  I told them I loved our room, but it was just not going to work for us because we needed to get our sleep.  They were very understanding of us two weary pilgrims and happily gave us a new room, after apologizing for the inconvenience.  We moved all our stuff down the hall and set up in our new room.  At 7:30, we walked to an Italian restaurant just down the block from the hotel and had a great meal while we watched all the locals come into the plaza for the concert that was just beginning with a hypnotist and magician.  At the corner of the plaza near our restaurant, there was a steep staircase leading to the lower part of the city that was lined with grafitti.  It made an interesting picture:

We both got Magnum chocolate helado bars and walked around the plaza and back to the room where within minutes we were both asleep.