The Traffic Increases from Sarria

September 14, 2015:  From time to time, since we left Leon, Heather and I were talking quite a bit about how things might change on the Camino after Sarria.  Most of our discussions centered around the dramatic increase in the number of pilgrims, many of whom were starting their Camino in Sarria to go 100 kilometers to Santiago, the minimal distance to “qualify” for a Compostela.  As soon as we reached the top of the steps in Sarria, that became exceedingly apparent.  It seemed as if pilgrims were pouring out of every bar and stone doorway as we moved higher up the hill towards Mosteiro da Madalena.

Before we reached Rua do Castelo, we ran into Thiago coming out of one of these albergues where he had stayed the night before.  He was having breakfast and spotted us passing by.  It was great to see him again, and he told us his blisters were much better, although he was still moving slowly.  We said goodbye and promised to look for each other later on.

At the top of the hill, we kept watching all the kids being dropped off for school at Madalena, and missed the left turn at the Cementario.  Heather went back up and found the turn off and I signaled to several fellow pilgrims to follow us.  Then we all followed the “herd” down the steep hill and out across the old bridge over the rio Celeiro.  The morning train into Sarria was just coming in along to the right of the path, bringing another block of pilgrims who would probably be on the Camino tomorrow. 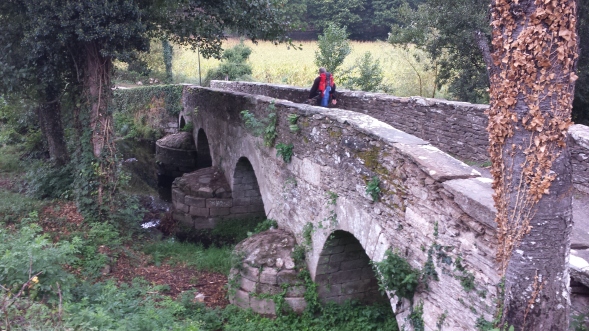 At Barbadelo, we stopped at a bar/cafe for a snack and met an Austrian pilgrim who had been walking the Camino Primitivo.  By his comments, he seemed to be highly offended by the huge crowds that we were all experiencing and was going to get a bus to Santiago instead of walking any further with all these noisy people.  We ate our meal quickly and got back walking asap.  On the way to Morgade, we passed through a series of small hamlets, many of which were lined with sunflower fields.  Folks who had been there before us had carved faces into some of these now seedless flowers.

In one of the little hamlets, Heather came across a small canine friend who had an injured paw.  The little fellow was wet from the rain and turned out to be very affectionate.  After following us for a 100 meters or so, his owner finally surfaced on the road and called to him. 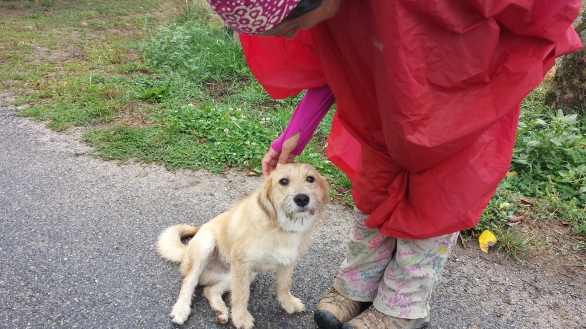 In one of the more forested areas, we ran into Thiago again and we walked with him for a good while, talking about his life in Brazil.  During this stretch, we were passed by a couple riding horses along the Camino, accompanied by two dogs who were having a great time greeting all the pilgrims.

The rain was sporadic between here and Vilacha, but as we got farther west, the sun seemed to be out more consistently and we put our ponchos away for good.

Just before reaching Vilacha, we stopped to rest on a stone wall.  It was there we encountered a young couple who were looking at a site to build a new albergue.  The couple had met on the Camino two or three years ago.  He was a Spanish hospitalero, and she was a Danish pilgrim.  They fell in love and now they were going to start their own business. They asked us what we thought of the idea of “yurts” on the Camino, particularly right at this point.  We told them we had eaten dinner in a yurt in the mountains of Colorado several years ago and enjoyed the experience immensely. They seemed quite serious about their vision.  We encouraged them to move forward with this idea.  We said goodbye and buen camino.

Soon we reached the top of the hill and were ready to descend to Portomarin.  Heather was hitting her 10-mile threshold with her thigh pain and was now starting to struggle down the hill.  We stopped midway down just before the bridge over the reservoir so she could stretch for a while and then made our way farther down the road and over the long span into Portomarin.

As we headed up the hill into the main square, Praza Conde de Fenosa, I remembered that there was a great supermercado on rua Xeral Franco amid the stone colonnades.  We went in there and got some things to snack on as well as some other sundry items.  Within a few minutes we were at our hotel, Pension Arenas.