September 16, 2015:  Rectoral Lestedo prepared a wonderful breakfast for us and we were out on the road by 8:30.  Rain was intermittent, so we decided to just leave our ponchos on until we saw some sunshine.  Good news was that the wind had died down somewhat so we were able to stay drier as we moved towards Palas de Rei.  We stopped at La Cabana where Greg and I had stayed last trip to get some coffee, get out of the rain for a while and use the restrooms.

While there, we ran into the couple from Iceland who were doing the same thing.  Good to see them again.  Back on the road, we bumped into the foursome from North Carolina who were just getting to La Cabana, and we walked with them to Palas de Rei.  From there, they were going to take a detour to Castillo Pambre so we said goodbye.  The rain came down more heavily as we made our way  towards the rio Pambre.  A passing pilgrim from Australia stopped and took a picture of us.

Not too far from here, we began to see evidence of the storm.

Just past the little bridge over rio Pambre, we stopped at Albergue Casa Domingo for a lunch snack. Here we met a German couple who were ordering cheeseburgers and beer! 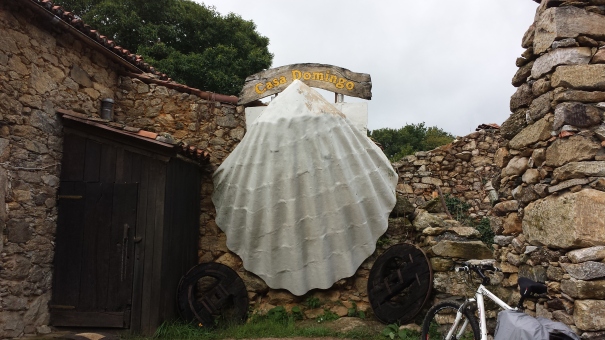 We had our classic bocadillo con queso and enjoyed a delightful conversation with the Germans.  After lunch, the rain had let up and we spotted the sun, so we de-poncho’d and set out to cross the delight old roman bridge. 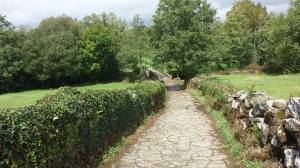 In a few miles we were passing the Poligono Industrial complex and heading back into the forest before coming down the rough trail to the old bridge leading into Furelos. 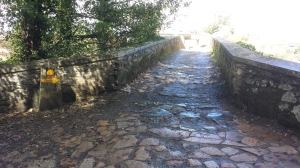 From Furelos, it was a relatively short walk up the environs of Melide.  As soon as we arrived in town, the deluge began again.  By the time we got to our hotel across town, we were once again soaked.  On the way to Pousada Chiquitin, our hotel, we saw a familiar sight in a store window that Greg and I had seen last trip.